Another great day! Health-wise not much has changed from other great days, therefore not much new stuff to report, other than today was a very active day without cancer-related pains. In other words, a great day all around.

Activity-wise, it was a very busy day even with limited things to report. For starters, the day started with Dianne making us breakfast before us getting ready to drive to Outlet Stores in Vacaville. Denise stayed home because she had come down with a cold.

Before arrived at the stores we stopped at Elmira to take some PICTURES. Elmira is not a big place, it has a population of 188. My interest is the rail spur, the leftover waterpower that served the old steam engines, and the old saloon that is falling apart but was part of the rail stop.

In the old days, Elmira was the major railroad stop between Fairfield and Davis. To get to Vacaville, travelers had to take a spur from Elmira. Today was our lucky day, not only did we get good pictures of whatever was left of Elmira, but we also were able to catch to trains within minutes of each other passing through Elmira in opposite directions.

After our picture taking, we went on to the outlet stores and spend the next three hours shopping there. On the way back we stopped at a new subdivision, being built between Elmira and Vacaville, to check out the model homes. We agreed that they were not for us, the layout and price were not what we expected.

Before returning home, our final stops in Antioch were Kmart, Kohl’s and Target. After getting finally home, and after unpacking, we had some neighbors visiting us to check out our remodeled kitchen. After they left it was dinner time.

That is it for today. In short – It was a GREAT day. The day ended with us doing a bit more TV watching to relax before calling it a day. 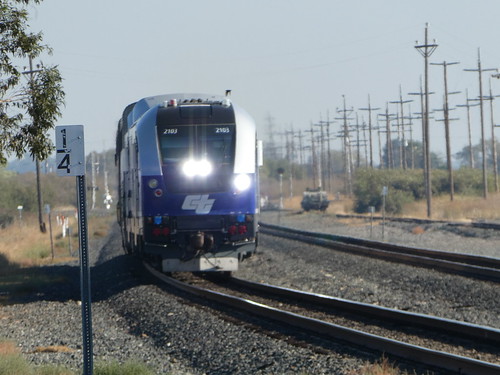