Today was another so-so day, with some health-related issue. However, the issues were different from yesterday. For starters, waking up my stomach did not play too well. I delayed getting up for a bit of time which helped. After getting up the other issue surfaced, which was mostly about pain in my hips and left leg. I kept the pain to a minimum resting for most of the day.

As to my activities today, after getting up, it was time for Dieter, Renée, and Carsten to open their presents from us since they are returning back home to Valencia (Southern California) very early tomorrow morning. I took the opportunity to take a lot of PICTURES to share with others in the Naujok Family.

The next activity was the special breakfast, which Dieter had prepared, French Toast! It was a really excellent French Toast breakfast prepared by Dieter in his special way. Afterward, I rested because of pain in my hips and left leg. Around 11:00 Dianne, Carsten and I went for a 45-minute walk, returning just in time for lunch.

After lunch, I rested and used the time for processing and uploading today’s photos to Flickr and starting to write this posting for uploading to Klaus’ Korner website later.

As mention before I spend most of the day resting. We had an excellent dinner, which included oven roasted Turkey Breast and Spiral Ham, plus all the fixings. However, I put more on my plate than I was able to eat. For the rest of the evening, I rested, watching some TV before retiring for the day.

In summary, today was another so-so day, health- and activity-wise. 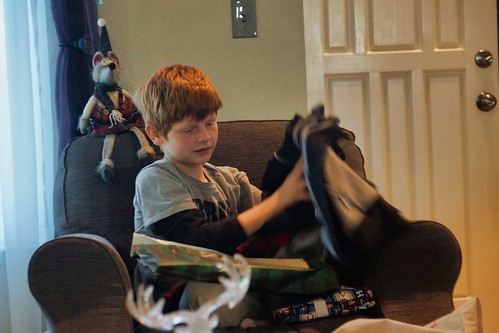